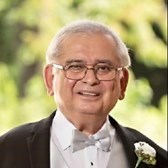 John James Papastefan passed away peacefully with his loving family at his side on Monday, December 14, 2020. Born in Cudahy, Wisconsin, John was a longtime resident of Mobile since 1967. He was a devoted husband, father, brother and dear friend to many. John earned a B.M.Ed. Degree at the University of Wisconsin-Whitewater, an M.A. Degree at Appalachian State University and a Ph.D at Walden University. Dr. Papastefan taught music at the University of South Alabama for 41 years, was the founding director of USA Percussion Ensemble and led many ensembles during his time at USA. During his career, he published over 85 articles and reviews in numerous respected publications and was the author of Timpani Scoring Techniques in the 20th Century. He was a member of Annunciation Greek Orthodox Church in Mobile and a member of St. Athanasios Greek Orthodox Church in Gulf Shores. John was preceded in death by his parents, Hariklea and Sava Papastefan; and his brother, Steve Papastefan. He is survived by his loving wife of 36 years, Maria Papastefan; son Demetri (Elleni), daughter Anastasia (Preston); sisters Ann Papastefan and Angie Papastefan; brother-in-law Steve Kamitsis, and other loving family members and dear friends. John was a lover of all cats, large and small, and he loved his kitties Rosie and Monroe. Due to COVID-19 restrictions, visitation will be limited to family and close friends. Visitation and service will be at Annunciation Greek Orthodox Church in Mobile at 11 AM on Saturday, December 19. Interment will follow at Mobile Memorial Gardens. May his Memory Be Eternal – In lieu of flowers, donations can be made in Dr. Papastefan’s memory to the John J. Papastefan Scholarship Fund at the University of South Alabama.

Service Time
A church service will be held on Saturday, 12/19/20 at Annunciation Greek Orthodox Church followed by a committal service at the grave site.