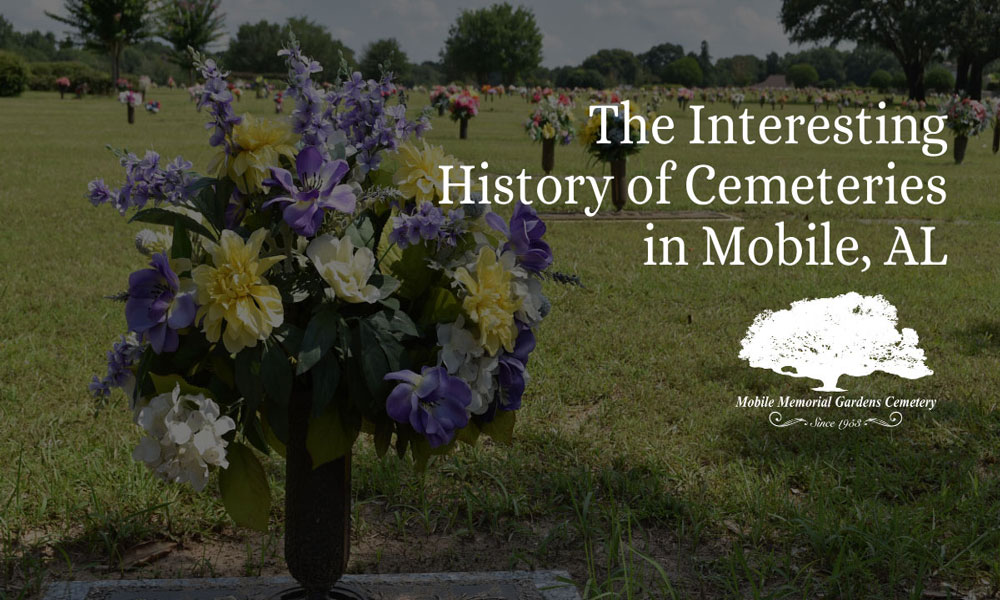 The Interesting History of Cemeteries in Mobile, AL

Many beautiful large cemeteries lie in the skirts of Mobile, Alabama. Most of which are noted as investor-owned. Mobile Memorial Gardens Cemetery is one of the few that are not for profit, making it a gem to find. Residents rely on these cemeteries for preserving and memorializing their passing loved ones, such as cemeteries like ours. With almost 50 total cemeteries counting, there is much fascinating history to learn about them in this old city of Alabama.

Let us trace back to the beginnings and oldest of Mobile’s first known historic cemeteries. The private Magnolia Cemetery in Mobile, Alabama was reminiscent of Jewish culture because of its oldest Jewish Burial in Alabama. Built-in 1836, it was also recognized for having the Confederate Rest area for soldiers. Another historic cemetery was the Catholic Cemetery that began as far back as 1848 and during the American Civil War. It has since then been expanded several times because of its full capacity and Catholic citizen’s inquiries. This sizable historic site is 150 acres long, making it an important older burial for Catholics that is now renovated. Both of these historic cemeteries have been symbolic for many decades to the people of Mobile.

A Landmark to Walk-through

Embedded through an array of oak trees, Church Street Graveyard is not only one of the oldest cemeteries (opening its grounds in 1836), but best known for Joe Cain’s burial. If Joe Cain rings a bell, that is because he is known as the founder of the Mardi Gras holiday. And if you happen to be intrigued by the paranormal, they say this might be the most haunted cemetery in Alabama. Even though it is closed today, many people still enjoy the visit.

We are proud to represent all of our fallen soldiers, veterans and sailors who fought in the military. Important times such as the eras from the Vietnam War and Civil War showed a compelling number of deaths with as much as 841 Union soldiers that would be laid to rest, concluding the events on Mobile National Cemetery grounds. Magnolia Cemetery also participated in the interments. An abundance of well-known burials are integrated into many cemeteries throughout Mobile and even acknowledged for showcasing the Medal of Honor for awardees.

Last but not least, we conclude with our cemetery history. Operating since 1953, our gardens offer various types of burials, depending on your preference and on your religion. Our one hundred twenty acres allow us to provide you with inground options, mausoleums and even cremation. Famous actors and actresses such as Calvin Robert Ellison and Jean Byron are entombed on our property.

Mobile Memorial Gardens Cemetery is a non-profit cemetery located at 6100 Three Notch Road in Mobile, Alabama. We are here to help those who are in need and make it a priority to preserve the memories of your loved ones in a dignified, honorable and comfortable place. Visit us online at www.mobilememorialgardens.org or on our Facebook page. If you have suffered a loss and would like to speak to us, please call us at 251-661-1333.