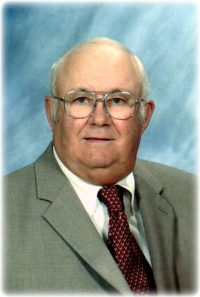 Cecil Alexander Christman, age 81, of Stone Mountain, Georgia, formerly of Irvington, Alabama, passed away Monday, September 23, 2019. A Funeral Mass will be said on Saturday, September 28, 2019, at 10 am at St. Margaret’s Catholic Church in Bayou La Batre, Alabama with the family receiving friends beginning at 9 am at the church. Burial will follow in Mobile Memorial Gardens, Mobile, Alabama. A native of Neillsville, Wisconsin, Cecil was a resident of Irvington, Alabama for over 50 years. He was retired from IBEW Local #505 where he was a member for 62 years. He was a long time member of St. Margaret’s Catholic Church, a loving husband, father and grandfather.Cecil was preceded in death by his wife of 58 years, Christine Kossow Christman, his parents, Agnes and Claire Christman, brother, Charles Christman and sister, Laurabelle Francel. He is survived by his daughters and son-in-laws, Cheryl and Bob Eybers of Duluth, Ga., and Angela and Stacey Wilson of Stone Mountain, Ga., grandson, Hunter Wilson of Stone Mountain, Ga., sisters, Clara Raya, Irene Larson, Martha (Edwin) Jensen and brother Donald Christman as well as many well loved nieces and nephews. In lieu of flowers, please make donations in his memory to www.catholicsocialservicesmobile.com.

Service Time
A church service will be held at10am on Saturday, 09/28/2019 from St. Margaret's Catholic Church, followed by a committal service at the grave site.