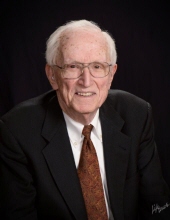 Clarence C. Keller, a native of Cullman, Alabama and a resident of Mobile for over 70 years, died Friday, March 29, 2019 at the age of 88. He was preceded in death by his parents Louis M. and Annie Byrle Keller, his brother, George Lee Keller, Sr., of Citronelle, son Clarence C. “Neil” Keller, Jr. of Shenzhen, China; and two sons-in-law, Grady C. Wilson and James J. Alvarez III. His survivors include his wife of 64 years Barbara Jean Lott Keller; daughters Karen Anne Wilson and Kathryn Marie Hutchins (Joe), both of Baldwin County, and Lauren Keller Alvarez of Mobile; six grandchildren, nine great grandchildren, and other relatives.
Clarence’s 45-year banking career began with a job as a part-time assistant mail clerk while he was still in Murphy High School and culminated in 1996 when he retired from what is now Regions Bank (formerly Merchants National Bank) as Executive Vice President and Southern Region Finance Officer. The only career interruption was for 4 years while he served in the U.S. Navy during the Korean Conflict.
While employed full-time at Merchants National Bank he attended Spring Hill College full time, graduating in 1961 magna cum laude with a bachelor’s degree in Commerce. He also graduated from several management programs including the Spring Hill College Executive Development Program, the School of Banking of the South at L.S.U., and the Bank Administration Institute School at the University of Wisconsin. When approaching retirement he commenced studies in the Graduate School of Theology at Spring Hill College, and in 1994 was awarded a Master of Theological Studies degree.
Clarence was active professionally, civically, and religiously. He was the first Alabamian to be certified by the American Society of Personnel Management as an Accredited Personnel Manager, and served as president of the Mobile Personnel Association and as chairman of the Personnel Committee of the Alabama Bankers Association. He taught Personnel courses for the American Institute of Banking and for the Alabama Banking School at the University of South Alabama.
He served as president of the Mobile Unit of the American Cancer Society and served on the A.C.S. regional board, and as Treasurer of the Mobile Chapter of the American Red Cross, where he received several awards including the Ralph Holberg Service Award. A member of the Rotary Club of Mobile, he served on its board for four years. For many years he was on the Agency Relations Committee at the United Way of Southwest Alabama. A Trustee of the Mobile Arts and Sports Association for 17 years, he served as its Secretary for 8. He was president of the Mobile-Metro Amateur Softball Association and was also on the boards of Main Street Mobile and First Night Mobile. He served a term on the Mobile Planning Commission, and was president of a Mardi Gras Mystic Society.
A member of St. Pius X Catholic Church since 1974, he was a long-time member of the Parish Finance Council, and was chairman of the Adult Faith Formation Team from 2004 to 2011. He taught Bible Classes for the Toolen Institute of Parish Services at St. Pius X. He served on the advisory board of the Christus Theological Society at Spring Hill College, and was on the board of The Friends of Catholic Cemetery. In 2009 he was awarded the Archbishop’s Christ the King Medal for exemplary parish service.
There will be a Rosary Monday, April 1, 2019 at 5:30 P.M. at St. Pius X Catholic Parish with visitation following from 6 P.M. until 7:30 P.M. in the St. Pius X Sarto Center Mass of Christian burial will be Tuesday, April 2, 2019 at 11:00 A.M. at St. Pius X Catholic Church. Interment will follow at Mobile Memorial Gardens. Contributions may be made to St. Pius X School Fund, 217 S. Sage Ave, Mobile 36606.

Service Time
A church service will be held at 11am on Tuesday, 04/02/2019 from St. Pius X Catholic Church, followed by a committal service at the grave site.