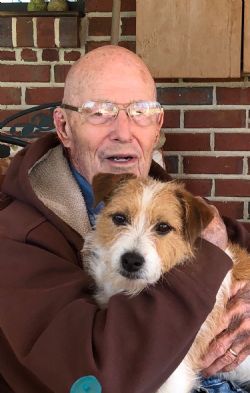 Born in Montgomery Co, AL. November 8,1927 to Merle and Flaudia Bryars Married to Euline Byrd on Nov. 11, 1949 They moved to Henderson, KY where he started working in the oilfield with Halliburton as an operator. His job took him and his family to many new homes in KY and W VA over his career. They eventually took an assignment overseas and lived in Tehran for an extended period of time. Upon returning to Henderson, KY he retired from Halliburton and then went to work for the state of KY issuing drilling permits. He enjoyed this position and acquired many long term friends during his 10 year tenure with the state.
Again, retired they moved back to where many family members reside in Mobile, AL and built a home on Tanner Williams Rd where they have lived for over 20 years.
Jim and Euline are survived by their two children Joan Scott /William (Bill) and Tony Bryars and Shalon. 3 Grandchildren and 6 Great-Grandchildren.
Jim is also survived by his best friends and caregivers Buddy and Sharon Coor, as well as his beloved Dog “Joey”.
His neighbors, siblings, children and Joey will miss him dearly. Funeral services will be held on Monday, March 18, 2019 at Mobile Memorial Gardens Funeral Home at 10am. Visitation will start at 9 am. Burial will be in Mobile Memorial Gardens.