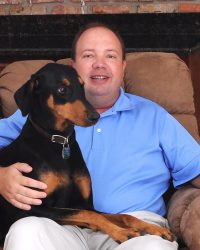 James Neal Wink, age 49, passed away Friday, October 9, 2020. He was born July 1, 1971 in Jackson, Mississippi to Bob and Mary Alice Wink. (Robert L. Wink and Mary Alice Schrandt Wink). Growing up in the Woodville Heights community in South Jackson, MS, he attended Oak Forest Elementary through grade six, St. Therese Catholic for 7th and 8th, then moved with his parents to Murfreesboro, TN for one year, and completed high school in Southaven, MS. James attended college at Mississippi State University, while pursuing a degree in Electrical Engineering; he was a member of the first Lacrosse team and the Theta Tau fraternity. College summers were spent in Kansas on the family farm. While in college, the internet was beginning to surface as “the next big thing,” and James would soon learn that his skills were marketable as a web designer and contractor. This was profitable and lured him away from college nine credits shy of his degree. And so his entrepreneurial career began. James had an engaging personality, a natural storyteller, never meeting a stranger, to this day an encounter with James, was not easily forgotten. Lover of life and learning, James did hold “degrees” as a master scuba diver, rock climber, sky diver, small airplane pilot, master parts certification. These hobbies allowed James to travel the world, have many underwater adventures and beyond such as golfing at Pebble beach on the west coast. Work opportunities eventually took him to Mobile, AL where he and his brother, Mark, formed their own company, Wink Enterprises, Inc.

In true James fashion, he embraced Mobile developing a passion for deep sea fishing and local spectator sports while living with his brother and sister-in-law. As the WEI brand grew, so did James’s involvement in the community. He was as generous with his time and resources as he was involved with his extra curricular activities. He supported many local causes and charities and endeavors, a favorite being the Alabama Deep Sea Fishing Rodeo. During this time, James met the mother of his children, “Frankie.” Settling into a home on the water, soon the biggest adventure of all began. Blessed with two beautiful children, Stephanie Suzanne, 11 and, Dylan James, 9 he accepted this life change with the same gusto as he approached anything else; being a Dad was his greatest joy. We knew it would be this way as he was already the favorite uncle to many of his nieces and nephews. December of 2015, after a seizure, fall and broken shoulder, James received a diagnosis of an inoperable brain tumor. As this was an unacceptable outcome, the quest began for answers outside of Mobile.

With the mission of maximizing his time on earth with his children, the hard fought journey began… Credit goes to Johns Hopkins, where James did undergo brain surgery and treatment that resulted in a 40% reduction of the tumor, allowing James time to focus on his children and things that mattered. Cleveland Clinic was responsible for critical care when in 2017, James was diagnosed with colorectal cancer that involved 18 months of surgeries, treatment and care. While making the most of every day, the brain cancer decided to make an earlier return than expected. It was time for us to pick up his cross and let him know he could rest. He is survived by his children, also surviving are mother, Mary Alice Wink and siblings, Melissa Baker (Gaines), John Wink (Lisa), Mark Wink, Matthew Wink (Julie); and many nieces and nephews. He was proceeded in death by his father, Robert L. Wink; and his Uncle, Steve Schrandt. Presiding over the celebration of life and graveside service are Reverend Shaun Kaulfers (Christ United Methodist Church) and Father Pat Arensberg (Holy Name of Jesus Catholic Church).

Funeral services are scheduled for Saturday, October 17, 2020 at 2:00 PM from the Chapel of Mobile Memorial Gardens Funeral Home with visitation beginning at 12:00 PM. Interment will be in Mobile Memorial Gardens. In lieu of flowers, the family would appreciate donations to Johns Hopkins Neurology and Neurosurgery Department or charity of your choice.

Service Time
A chapel service will be held at 2pm on Saturday, 10/17/2020 from Funeral Home, followed by a committal service at the grave site.