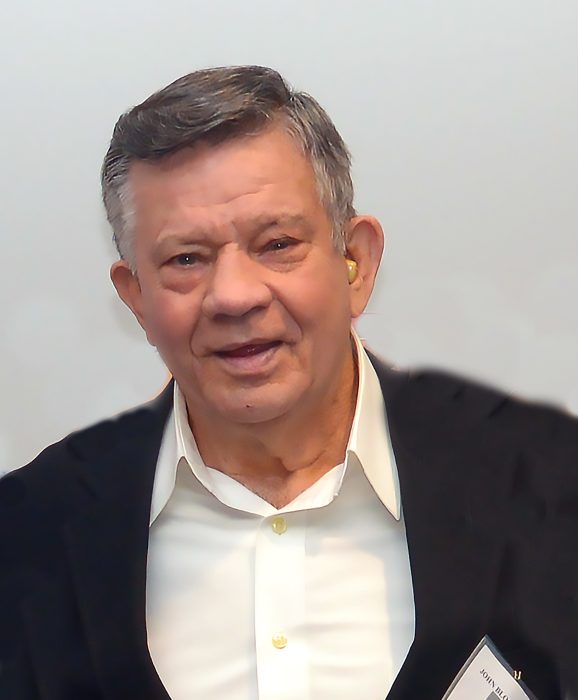 John Davis Bloodsworth, 80, a longtime resident of Mobile, AL, passed on to be with the Lord Saturday, August 31, 2019. He was preceded in death by his loving wife of 56 years, Pat (nee Carroll) Bloodsworth, and survived by two children, Ashley Ruth (Ric) Sweitzer and John Gregory (Amy) Bloodsworth; his brother, Devon (Francis) Bloodsworth; two grandchildren, Ian (Chelsea) Parker and Lilla Bloodsworth, as well as other relatives and friends.

John was born to parents Alger Mack Bloodsworth and Mollie Bell Bloodsworth nee Morris in Brewton, Alabama. A graduate of Murphy High School, John went on to enjoy a successful amateur boxing career. Later, he worked and retired from International Paper Company as an instrument mechanic. John was a member of the Howard E. Palms Masonic Lodge, an avid golfer, and handyman extraordinaire, having built two homes during his life. Funeral services are scheduled for Thursday, September 5, 2019 at 12:00 PM from the Chapel of Mobile Memorial Gardens Funeral Home with visitation beginning at 10:00 AM. Interment will be in Mobile Memorial Gardens.

Service Time
A chapel service will be held at 12pm on Thursday, 09/05/2019 from Mobile Memorial Gardens Funeral Home, followed by a committal service at the grave site.