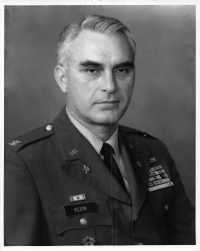 Col. John Melvin Klein (USA Col.ret.) age 95 was born on December 15, 1924 and died peacefully on Tuesday, October 6, 2020. Col. Klein, son of Matthew and Josie Lee (Farnel)l Klein, loving husband of Anne Elizabeth Klein (Britton). He is survived by his daughter, Jamie Lee Klein, son John Melvin Klein, Jr. and granddaughter, Erin Klein Dillard, and many nieces and nephews. Col. Klein (John) spent his professional life serving in the US Army for 32 years, beginning with an assignment in Germany during WWII, the Korean War and two tours during the Vietnam conflict. He married on September 2, 1950 to Anne Elizabeth Britton, John & Betty started their family and began a military life that took them to many interesting locations around the country including the Hawaiian Islands, Washington D.C. and the Pentagon. Col. Klein was decorated by his country with a Silver Star, Legion of Merit, Bronze Star & Purple Heart among others. After retirement John returned to Mobile where he and Betty were active members of Dauphin Way Baptist Church and could often be seen behind the Welcome Desk at Providence Hospital as longtime members of the Providence Hospital Auxillary. Both avid golfers and veteran members of Herron Lakes Country Club. John lost his wife of 63 years in 2013. John will be remembered for his enduring work ethic, acquired in his youth working alongside his mother and siblings during the end of The Depression era and for his loving commitment to his wife and children. John’s success in the military and in life generally are the results of a genuine and unvarnished bearing that earned him respect and admiration in his professional and military associations and the love and gratitude of his family and friends. John will be honored for his patriotism again at graveside with a full military honor guard. Funeral services will be held at Mobile Memorial Gardens Funeral Home on Tuesday, October 13, 2020 at 10 am. Visitation will start at 9am. Internment will be in Mobile Memorial Gardens.

Service Time
A chapel service will be held at 10am on Tuesday, 10/13/2020 from Funeral Home, followed by a committal service at the grave site.