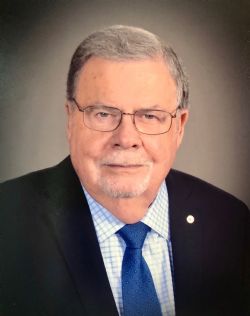 Mr. Lurin “Lou” Otto Dixon, age 77, passed away on Saturday, May 4, 2019 in Baldwin County, AL. Dixon, a native of Thibodaux, LA, had lived in Mobile and Daphne, AL since 1973. He was preceded in death by his parents, Otto & Eva Dixon. He is survived by his loving wife of 12 ½ years, Phyllis Ducote Dixon; his children, Steve (Melissa) Dixon, Mark Dixon, Lauren (Ron) Confer, Buffy Johnston, Richard Adam Johnston; three grandchildren, Thomas LeGros, Parker Dixon and Camryn Thomaston; brother, David (Clydene) Dixon and the mother of his children, Angela Mooring. Lou was a 1965 graduate of The University of Alabama. Following graduation, he served as a Captain in the US Air Force as a Public Information Officer and the Louisiana Air & Army National Guard. He worked for a number of years in radio and television; broadcasting and sales. In 1982, he reverted to Military Enlisted Status and served in HQ 226th Area Support Group (ALARNG), now the 226th, Maneuver Enhancement Brigade at Fort Whiting Armory in Mobile. As a member of the 226th, he served for eleven years as the full time AGR Training/Readiness NCO. He was deployed to Saudi Arabia for Operations Desert Shield and Desert Storm. Dixon had thirty years of combined Active Duty and National Guard Service, retiring as the 226th HQ Company First Sergeant/Master Sergeant in 2002. After Desert Storm, he joined the staff of Radney Funeral Home and later, Hughes Funeral Home in Daphne. Lou has been a Licensed Funeral Director since July 23, 1996. He was an active member of the Kiwanis Club of Daphne-Spanish Ft.
Funeral services will be held on Wednesday, May 8, 2019 at 2pm from the chapel of Mobile Memorial Gardens Funeral Home. Family will receive friends at the funeral home from 12-2pm. Interment will be in Mobile Memorial Gardens.
In lieu of flowers, donations may be made to St. Jude Children’s Research Hospital.

Service Time
A chapel service will be held at 2pm on Wednesday, 05/08/2019 from Mobile Memorial Gardens Funeral Home, followed by a committal service at the grave site.