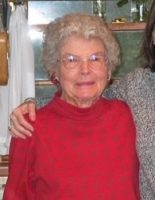 Margaret McCorquodale Greer, 98, a native of Demopolis, Alabama and longtime resident of Mobile, Alabama, died Friday May 10, 2019. She was the daughter of the late Curtis Thomas McCorquodale and the late Lora Victoria Bozone McCorquodale of Clarke County Alabama. She moved with her family to their ancestral home in Jackson, Alabama after living in Salitpa (Clarke County) and Mobile. She attended Barton Academy and Murphy High School in Mobile and graduated from Jackson High School in 1938. In 1939 she was employed at Hollingsworth & Whitney (later Scott Paper Co) in Mobile where she met Vergil McKinley. They were married in 1942 and had a son, David. After the death of Mr. McKinley, she married Efford Wayne Greer of Mobile in 1952. They raised a family of three children and enjoyed 62 happy years together. Mrs. Greer was an active member of First Baptist Church of Mobile serving on numerous committees including the Downtown Church Alliance and Meals on Wheels. Mrs. Greer was preceded in death by her sisters, Gertrude Harris McCorquodale and Martha McCorquodale Cassidey of Mobile and her brothers, George Washington Granade Jr and Curtis Thomas McCorquodale Jr. of Jackson. AL Mrs. Greer is survived by her sons, David Parks McKinley, MD, of Sheffield, Alabama, and Efford Wayne Greer, Jr. of Corpus Christi, Texas; her daughter, Margaret Kathleen Greer (Gerald C. Tomlinson) of Mobile, Alabama; her sister, Lora McCorquodale Watson of Virginia; her grandchildren, Joseph Parks McKinley, Charles Key McKinley (Dusty), Margaret McKinley Southward (Alex), David Parks McKinley, Jr., Emma Anne McKinley; her great-grandchildren, Cassiday Ann McKinley, Leo Alexander Southward and Helms McKinley; other relatives and friends. The family would like to express appreciation to the staff of Allen Health and Rehab for their thoughtful and kind service. In lieu of flowers, the family requests that memorial donations be made in Mrs. Greer’s name to the First Baptist Church of Mobile General Fund, 806 Government Street, Mobile, Alabama 36602. Funeral services will be held Tuesday, May 14, 2019 at 2:00 from the Chapel of Mobile Memorial Gardens Funeral Home. The family will receive friends Tuesday at the funeral home from 1:00 PM until service time. Interment will be in Mobile Memorial Gardens.

Service Time
A chapel service will be held at 2pm on Tuesday, 05/14/2019 from Mobile Memorial Funeral Home, followed by a committal service at the grave site.