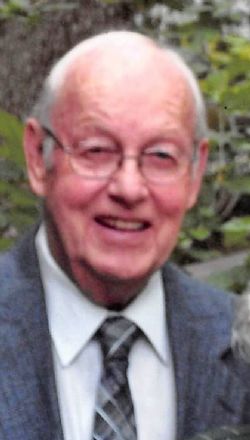 Merlin “Todd” Dean Halstead, a native of Grand Meadow, MN and longtime resident of Mobile, AL, died Friday, April 5, 2019 at the age of 87.
Todd worked for Boeing in the space program in Huntsville, AL from 1959 until 1972, then owned and operated Dairy Queens in Mobile, AL for over 32 years. He and Sue enjoyed a lifetime of traveling together.
He was preceded in death by his father, Walter Clarence Halstead; his mother, Jennie Ringen Berhow; his wife of 65 years, Susie Joquet Manning Halstead; his son, Michael David Halstead; and his brother, Curtis Wayne Halstead. His survivors include his daughter, Barbara Halstead (Kenneth) Fortner; one sister, Janet Seefeldt; one brother, Wesley (Bonnie) Halstead; two grandchildren, Kristen (Johnie) Corn, Jr. and Aaron (Amy) Fortner; three great-grandchildren, Anastasia Corn, Johnie Corn, III and Leia Fortner; nieces; nephews; other relatives and friends.
Funeral services will be held Wednesday, April 10, 2019 at 12:00 Noon from the chapel of Mobile Memorial Gardens Funeral Home. The family will receive friends at the funeral home Wednesday from 10:00 AM until service time. Interment will be in Mobile Memorial Gardens.

Service Time
A chapel service will be held at12pm on Wednesday, 04/10/2019 from Mobile Memorial Gardens Funeral Home, followed by a committal service at the grave site.