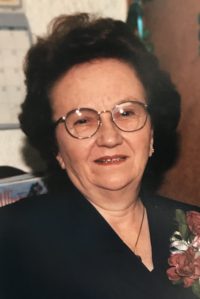 Muriel Grey Alexander Boykin, 96, of Casper, WY, passed away Wednesday, March 18, 2020.
She was born to Lottie (Lee) and John Alexander, September 15, 1923, in Thomaston, AL. She grew up helping her mom run the first telephone switchboard from their home. They moved to Demopolis, AL, on the Black Warrior River and eventually moved to Mobile, AL.
She married Lloyd Dausman on November 7, 1944, and had one daughter, Rena Gail Watts. Muriel was divorced on August 1, 1947. She married Charles Boykin on December 30, 1950 and the two families were joined. (Charles’ children: Charles Moody Jr., William Palmer, Charlene, and Muriel’s daughter, Rena.) She worked at the Alabama Power Company in Mobile for 40 years and 7 months. She was a hard worker and always made sure that her family and friends were well taken care of. She spent the last 20 years of her life in Casper, WY, to be close to family. As a young woman, she enjoyed playing tennis and doing needlepoint. Throughout her life she loved reading books and going to church. She was a strong believer in Christ and was a prayer warrior for her family. She found great joy in cooking and serving others. Muriel could cook any type of seafood and was famous for her seafood gumbo. Muriel is survived by several grandchildren, great-grandchildren, and great-great-grandchildren. Her family affectionately called her “Mamaw.” She loved each of her grandchildren and carried photos of family members with her. She was preceded in death by her mother, father, 2 younger sisters and 1 younger brother (John William Alexander, Doris (George) Stanley, Vernell (Lavert) Marks), her husband, and daughter, Rena.