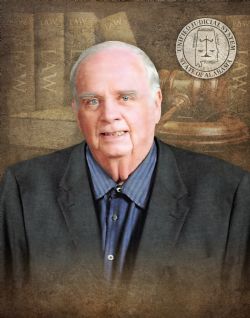 Thomas Marshall Marr, Sr, was born on March 28, 1932, in Bowling Green, Kentucky. He resided in Mobile, Alabama, until his passing on April 17, 2019.
Tommy graduated with an Associates Degree in Science from the Marion Institute, a Bachelor of Science in Civil Engineer from The University of Alabama, and a Juris Doctor of Law from the University of Alabama School of Law. The University of Alabama Department of Civil Engineering awarded him the Outstanding Fellow in 1992 and the Distinguished Engineering Fellow in 2011.
He had been an Assistant Attorney General for the State of Alabama, a Representative for the State of Alabama Legislature, President and Chairman of the Board of Deposit National Bank of Mobile, Director of Central Bank of Mobile, and Director of Mrs. Stratton’s Salads. He founded DRC, Inc., which provided emergency services during natural disasters.
Tommy was the senior law partner in the firm Marr & Friedlander, PC, for 50 plus years with his late partner Maury Friedlander. He was a successful entrepreneur in Baldwin County, having built the first privately-owned sewage treatment plant in Orange Beach and numerous condominium projects.
Tommy was a member of Christ United Methodist Church, The Country Club of Mobile, Sigma Chi Fraternity, and the Mobile Bar Association.
Tommy was preceded in death his parents, Lenore and Marshall Marr. He is survived by his wife of 40 years, Christine Marr, his six children, Tommy, Lynn (Frank), Bruce (Mary Helen), Tara (Greg), Gina (Jeff) and Scott (Julie); his eighteen grandchildren, Kelly (Phil), Frank Jr., Hunter (Amy), Merri Brana (Richard), Katherine, Courtney, Grier, Lucy, Reed, Frances, Mallie, Laurel, Gracie, Kent, Zach, Will, Nate and Livvy; eight great-grandchildren, and many other relatives and dear friends. Pall bearers will be Frank, Hunter, Zach, Will, Nate, Kent and Reed. Honorary pall bearers will be Dane Hinton, Dan Alexander, Billy Wright and Lowell Harrelson.
A special thanks to Latosha Prince, Sylvia Westry, Tatianna Mathis and everyone with One On One Senior care for the loving and professional care they provided.
The family will receive friends on Tuesday, April 23, 2019, at Christ United Methodist Church, 6101 Grelot Road, from 10 A.M., with funeral service to follow at 11 A.M. Interment will be at Mobile Memorial Gardens. In lieu of flowers, the family has requested donations be made to Christ United Methodist Church, the Alzheimer’s Association, or the charity of your choice.

Service Time
A church service will be held at 11am on Tuesday, 04/17/2019 from Christ United Methodist Church, followed by a committal service at the grave site.