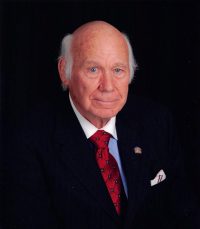 Mr. Thomas Sterling Harris, age 92, passed away on Saturday, June 5, 2021. Mobile Memorial Gardens Funeral Home is honored to be entrusted with the arrangements.Thomas was born in Clarke County, Mississippi on April 15, 1929, to the late Sterling and Stella Mae Harris. He was also preceded in death by two brothers, Bob Harris and Bill Harris; two sisters, Ella Fleming Brasher and Shirley Broadhead; and a granddaughter, Christy Harris.Thomas graduated from Carmichael High School and attended Scooba Junior College before entering the United States Army where he was stationed at Ft. Smith, Arkansas. He was married for 68 years to the love of his life, Patsy Ruth Harris. They had 4 children, Debbie, Donnie, Teresa, and Gary. He had 6 grandchildren, 9 great-grandchildren, a large extended family, and many, many friends. He was a Master Mason with The Grand Lodge of Mississippi and was awarded the 50-year pin. Thomas was a charter member of Cypress Shores Baptist Church since the 1960s. He loved God, teaching Sunday School, and being involved in all church activities.Thomas was a successful salesman his entire life. He began selling Bibles when he was 18 years old and eventually opened his own furniture store called Furniture Gallery in Tillman’s Corner and ran it for over 35 years. He always supported his community and was involved in various other organizations. Thomas loved to fly, earning his pilot’s license and owning his own plane. He loved to fish, hunt, SALE ANYTHING, and spending time with his family. He leaves behind to cherish his memory his wife, Patsy Ruth Harris; children, Debbie Downey (Joe), Donnie Harris, Teresa Matherne (Lance), and Gary Harris; grandchildren, Jason Downey (Mindy), Nicole Woerner (Allen), Heather Waters (Matt), Allison Davis, and Dustin Harris; great-grandchildren, Kaleigh Davis, Caroline Downey, Stella Waters, Katherine Woerner, Olivia Downey, William Woerner, Henry Waters, Pilot Woerner, and Ava Jane Harris; and one sister, Pat Caudle. Funeral services will be held Thursday, June 10, 2021, at 12:00 p.m. from the chapel of Mobile Memorial Gardens Funeral Home. The family will receive friends from 11:00 a.m. until the service at 12:00 p.m. at the funeral home. Burial will follow at Mobile Memorial Gardens Cemetery.

Service Time
A chapel service will be held at 12:00 PM on Thursday, Juen 10, 2021 at Mobile Memorial Gardens Funeral Home followed by a commital service at the grave site.

Death Notice vs. Obituary: What's the Difference?
You may have heard the terms “death notice” and “obituary” used simultaneously in funeral settings. However, they do differ in

5 Facts About Above-Ground Burials
The final disposition of your loved one does not always necessarily need to be in the form of in-ground burial.