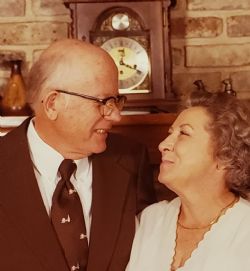 Mr. Charles Maurice “Maury” Hazen, Jr., a native of Mobile, went to be with the Lord on Wednesday, April 27, 2019, at the age of 94. Mr. Hazen and his wife, Hallie, touched deeply the lives of many in the Mobile community and far beyond. Maury is survived by his brother, Donald, his two sons, Neal (Karen) and Gary (Marion), and his daughter, Martha (Ferrell) Lewis – as well as 7 grand-children, 9 great grand-children, and 4 great-great grand-children.
Maury graduated from Murphy High School at the age of 16 and served in the U.S. Naval Air Force in WWII as flight instructor, aircraft mechanic, line boss, and air-conditioning maintenance. After the war, he took over the operation of Hazen Sheet Metal and became owner of Hazen Air Conditioning in 1963. His company designed, installed and serviced many residential, commercial, institutional and light industrial systems. Maury also taught air-conditioning and refrigeration classes for R.S.E.S. for 14 years and gave lectures on air-conditioning design and service to various professional groups. He served as manager of maintenance at Spring Hill College and served on the board of trustees at Bishop State for several years after his first retirement. For the last 20 years, Mr. Hazen has worked as a volunteer at Christ United Methodist Church’s Lifegate – a community outreach program helping the needy.
One of Maury’s favorite hobbies was sailing. He was an avid member of the Buccaneer Yacht Club where he enjoyed racing and just generally being out on the water. He also served as Commodore.
The funeral Service for C. M. “Maury” Hazen, Jr., will be held on April 20th, 2019. Visitation will be at Christ United Methodist Church at 10:00 AM and the service will start at 11:00 AM. Interment will be at Mobile Memorial Gardens on Three Notch Rd. The family requests that donations be directed to the Lifegate Ministry at Christ United Methodist Church in lieu of flowers.

Service Time
A church service will be held at 12pm on Saturday, 04/20/2019 from Christ United Methodist Church, followed by a committal service at the grave site.