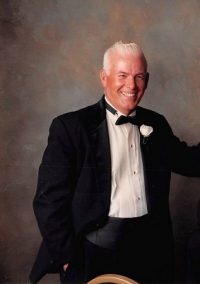 Herman Donald “Donnie” Andrews, age 82, of Mobile, Alabama, passed away Saturday, October 5, 2019, at Sadd Hospice Inpatient Facility. Donnie was born October 24, 1936, in Repton, Alabama, and resided in Mobile for over 60 years. He is preceded in death by his wife of 50 years, Virginia Arlene Andrews; his parents Earlie Herman and Willie Dee Andrews; six brothers and three sisters. He is survived by his two sons Perry Andrews and Kyle (Kellie) Andrews; his two granddaughters, Kalyn Andrews and Kerry Andrews; beloved sister-in-law Marion Hargett; and many other family members and friends. Donnie worked for International Paper Company for over 30 years, retiring in 2001. He was a long-time member of Orchard Baptist Church and an avid fisherman before suffering a stroke in 2005, which left him unable to speak or walk. Before his stroke, he enjoyed playing with his nieces and nephews and especially his granddaughters, who he loved and adored. He was cared for at his home for over 14 years by his sons and two sisters-in-law, Marion Hargett and Sharon Warren (who passed away two years ago). He enjoyed watching Alabama football with his sons and would say, “Roll Tide Roll” with prompting as well as telling his granddaughters, “I love you more”. One of his hospice nurses, who only knew him for a short time, mentioned he had beautiful blue eyes and always had a smile. That is how we will remember PawPaw. Funeral services are scheduled for Thursday, October 10, 2019, at 2:00 PM from the chapel of Mobile Memorial Gardens Funeral Home. The family will receive friends at the funeral home Thursday from 12:00 noon until the service. Interment will be in Mobile Memorial Gardens.

Service Time
A chapel service will be held at 2pm on Thursday, 10/10/2019 from Mobile Memorial Gardens Funeral Home, followed by a committal service at the grave site.

Different Ways to Customize Your Memorial
Traditionally, memorials are made from bronze materials because of their known durability and resistance. At Mobile Memorial Gardens Cemetery, you
Read more.

The Interesting History of Cemeteries in Mobile, AL
Many beautiful large cemeteries lie in the skirts of Mobile, Alabama. Most of which are noted as investor-owned. Mobile Memorial
Read more.

The Different Kinds of Burial Markers in Mobile, AL
Whether you’re pre-need or facing the difficult decision of how to pick a gravestone that’s right for your lost loved
Read more.
1 2 3 … 10 Next »