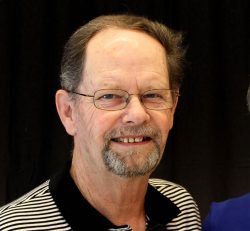 Larry Frank Hawkins of Theodore, AL passed away at home, following a brief illness, on August 10, 2019, the day of his 66th birthday. Larry was born in Mobile, AL where he grew up and graduated from Theodore High School. Soon after graduation, Larry began training as a heavy equipment operator, moving thousands of tons of dirt in order to build highways and major construction sites. He enjoyed hunting and fishing and spending time with his children and grandchildren, cutting up with them and making them laugh. He was a member of Woodridge Baptist Church and while his health permitted, he enjoyed attending services there. Larry was predeceased in death by his parents, Frank and Ruth Hawkins, and his brother, Benjamin Franklin Hawkins, all of Theodore, AL. He is survived by his wife of 34 years, Carol Jean Hawkins; his daughter, Vicki (John) Burke of Panama City, FL; grandchildren, Allie Kent, Alysse Burke, Ava Burke and Tripp Burke; his step children, Jason (Paige) Harrison, Robbie (Nicole) Harrison, and Tiffani (Ryan) Sage; his step grandchildren, Hunter Rockhold, Emily Rockhold, Tyler Harrison, Brennon Harrison, Emerson Harrison, Ryan Sage Jr., Alyssa Sage, and Mylee Sage; his brothers, James T. Hawkins and John David Hawkins of Greenville, AL, and his sister Patricia (Randall) Woodham, of Gulf Shores, AL, plus other nieces and nephews, family, and friends. A Celebration of Life service will be held at Mobile Memorial Gardens Funeral Home on August 15, 2019, with visitation from 10:00 AM until noon. Funeral services, officiated by Rev. Mack Morris, will be held from the chapel at 12:00 Noon with interment immediately following in Mobile Memorial Gardens. Larry was loved by his family and friends and his gentle and kind spirit will be missed by all.
1953-2019
A chapel service will be held at 12pm on Thursday, 08/15/2019 from Mobile Memorial Gardens Funeral Home, followed by a committal service at the grave site.