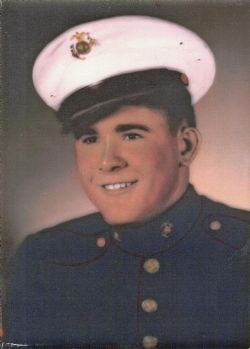 Jan. 18, 1935-Mar. 24, 2019 Lawrence Mitchell Berger, a native of Houma, LA and current resident of Grand Bay, AL, died Sunday, March 24, 2019 at the age of 84. He was a retired U.S. Marine Staff Sargent who served in the Korean Conflict and Vietnam and was the recipient of numerous awards and commendations, including the Purple Heart. He enjoyed bowling, fishing, gardening, watching all sports, boxed for the Marine Corps in his earlier years, loved to cook and was a master baker. He was preceded in death by his parents Peter Berger and Alice Byrd Berger; his first wife, Lucy A. Berger; his second wife, Phoebe Berger; two brothers, Severn Berger and Raymond Berger; and two sisters, Florence A. Barnes and Betty Ferguson. His survivors include his children, Michael A. Berger, Deborah Berger, Marcus Berger, Kelly B. Sinclair, Angie Jones (Ashley),and Ricky Jones (Tamra); one brother, Warren Berger (Marilyn); grandchildren, Jonathon (Samantha), Christopher (Heather), Nicholas, Robin and Joseph Berger and William and Astrid Jones; great-grandchildren, Abigail, Aiden, Thomas, Miles, Silas, and Amiyas; and other relatives and friends. Funeral services will be held Thursday, March 28, 2019 at 12:00 Noon from the chapel of Mobile Memorial Gardens Funeral Home. Visitation will begin at 10:00 AM. Interment will be in Mobile Memorial Gardens.
1935-2019
A chapel service will be held at 12pm on Thursday, 03/28/2019 from Mobile Memorial Gardens Funeral Home, followed by a committal service at the grave site.