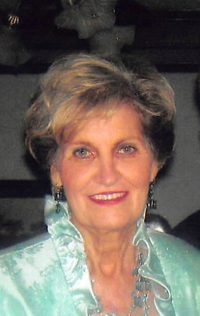 Mary J. Applegate, age 81, of Mobile, passed away Saturday, April 11, 2020. She was preceded in death by her parents, Wm. B. and Gladys Jackson She is survived by her husband, Don; one daughter, Lesa Applegate Carpenter (Allan); and 4 grandchildren, Haley, Jacob, Blakely (the triplets) and older granddaughter, Shelby. Mary was a Mobile native and graduated from Murphy High School. Soon after graduating, she met her future husband Don on Armed Forces Day 1959 Open House at Brookley Pier while Don was serving on the USS Rival. She visited her mother the next day in the hospital and told her she had met the man she was going to marry. Her mother replied, "I am in the hospital with a weak heart and you tell me that." Soon after they were married. She worked for the Dean of Chemistry at the University of Alabama, in Tuscaloosa and literally helped Don receive his BS Degree. They transferred to Columbus Ohio, and each place they went, she was always gaining employment immediately. There she soon became secretary to the Dean at Otterbein College. In Mississippi she became an accountant with Ditch Witch, then on to Houston where her career with Weight Watchers took off. She became a leader, a quick learner and was awarded the highest honor for achievement as a leader out of 500 candidates. After Don retired, they moved back to Mobile where Mary continued her Weight Watchers career. She had a genuine desire to help people in any setting and was a good listener. Because of this, she helped so many achieve their goals. Don and Mary loved to travel and before their daughter was 18, she had visited every state in the lower 48. Through the years she also traveled to 35 countries, including Russia, China, Japan, Egypt and most of Europe. Don has countless photos to remember the trips by and will cherish all the memories. In June they would have celebrated 60 years of marriage. She was a fighter, after being very ill for almost 4 years. She never gave up and always had a good attitude. She did everything the Doctors told her to do. Don was so proud of her and could not have had a sweeter, more deserving and caring wife. She is free of pain at last with our beloved Lord in heaven. Besides being multi-talented, she was active as an Azalea Trail advisor, chaperoned for contestants in America Junior Miss, on the committee for ten outstanding young men contest, active in a local mystic society, and a member of Christ United Methodist Church and the Fellowship Sunday School class. As well as continuing her Weight Watchers career here in Mobile. Any love offering would be well received at CUMC Lifegate Ministry, 6101 Grelot Road, Mobile, AL 36609. Due to the COVID-19 pandemic and strict state and local guidelines, the funeral home and cemetery will enforce the 10-person limit to all gatherings. There will be a graveside service Wednesday, April 15, 2020 at 10:00 a.m. in the mausoleum of Mobile Memorial Gardens on Three Notch Road in Mobile, Alabama. Officiating will be Reverend Jeff Spiller. There will be a visitation from 9:30-10:00 a.m. at Mobile Memorial Gardens Funeral Home prior the graveside service.
1939-2020
A graveside service will be held at 10am on Wednesday, 04/15/2020.